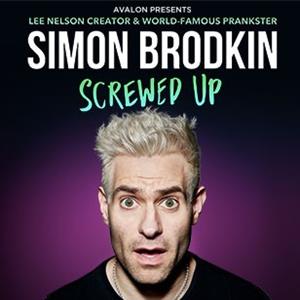 Fresh from his sold-out, critically-acclaimed Edinburgh Fringe run and becoming the most viewed British comedian of all time on TikTok, world-famous prankster and Lee Nelson creator Simon Brodkin is back with an outrageous new stand-up show.

In 'Screwed Up' Simon rips into celebrity culture, social media, the police, Putin, Prince Andrew and Jesus. Nothing is off limits in this hilarious show, including his own mental health, his family, his five arrests and how he once found himself at an underground sex party.

'No show has made me laugh more'
The Times